Take A Walk On The Wild Side Of North Luangwa

Africa’s Great Rift Valley extends down into north-eastern Zambia, and it is here that the Luangwa River has, over millennia, carved a uniquely beautiful landscape. This is an area of pristine wilderness, home to Zambia’s only black rhinos, its elephant stronghold, and has one of the highest lion densities in the region… 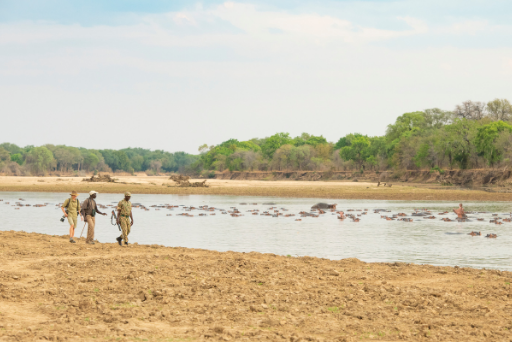 We had come to Mwaleshi and Takwela Camps to explore this amazing place on foot. Remote and wild, only accessible by flight or with good bush driving skills. Walking in North Luangwa is the ultimate way to explore this place… total isolation, an intimate, personal experience. With few roads and even fewer people, you are unlikely to see anyone else for the duration of your safari.

Walking out from Mwaleshi Camp, we were given some final instructions… “single file, no loud noises, no bright clothing, stay behind the guide, pay attention, DO NOT wander off.” We walked through long grass, across rivers, ducked under branches and stopped occasionally to untangle ourselves from ‘wait a bit’ thorn bushes. The ‘bush’ is very different when experienced on foot, you’re suddenly aware of every noise and rustle in the undergrowth and every twig cracking underfoot. The distant roar of a lion or not so distant trumpet of an elephant makes you very aware of your surroundings… and your mortality!

Our first afternoon walk lasted three hours. We saw things you normally miss from the back of a safari vehicle. Flight displays of lilac-breasted rollers, insect catching antics of bee-eaters, ungainly flight patterns of hornbills as well as an up-close look at various nest styles of some of the 12 different weaver species found in North Luangwa.

The river turned orange and scarlet in the sunset, as we walked along the riverbank. The smell of the native ‘potato bush’ hung in the air, as did the trademark “popcorn smell” of a genet cat’s scent markings. Back in camp that night we ate dinner by lantern light, overlooking the darkened river, whilst the noises of the bush carried on around us. We could hear lions roaring on all sides and the occasional trumpet of a young elephant across the water. 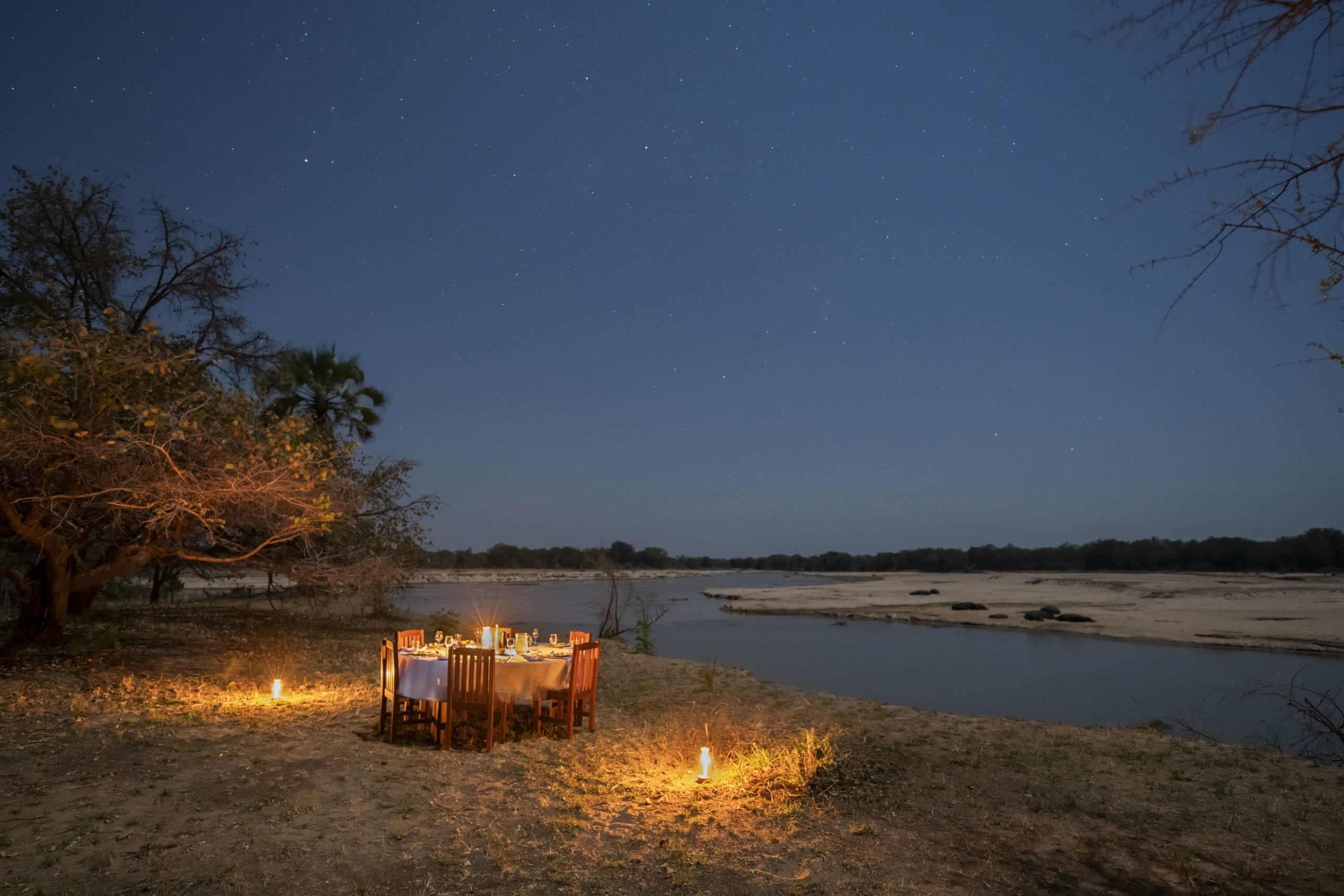 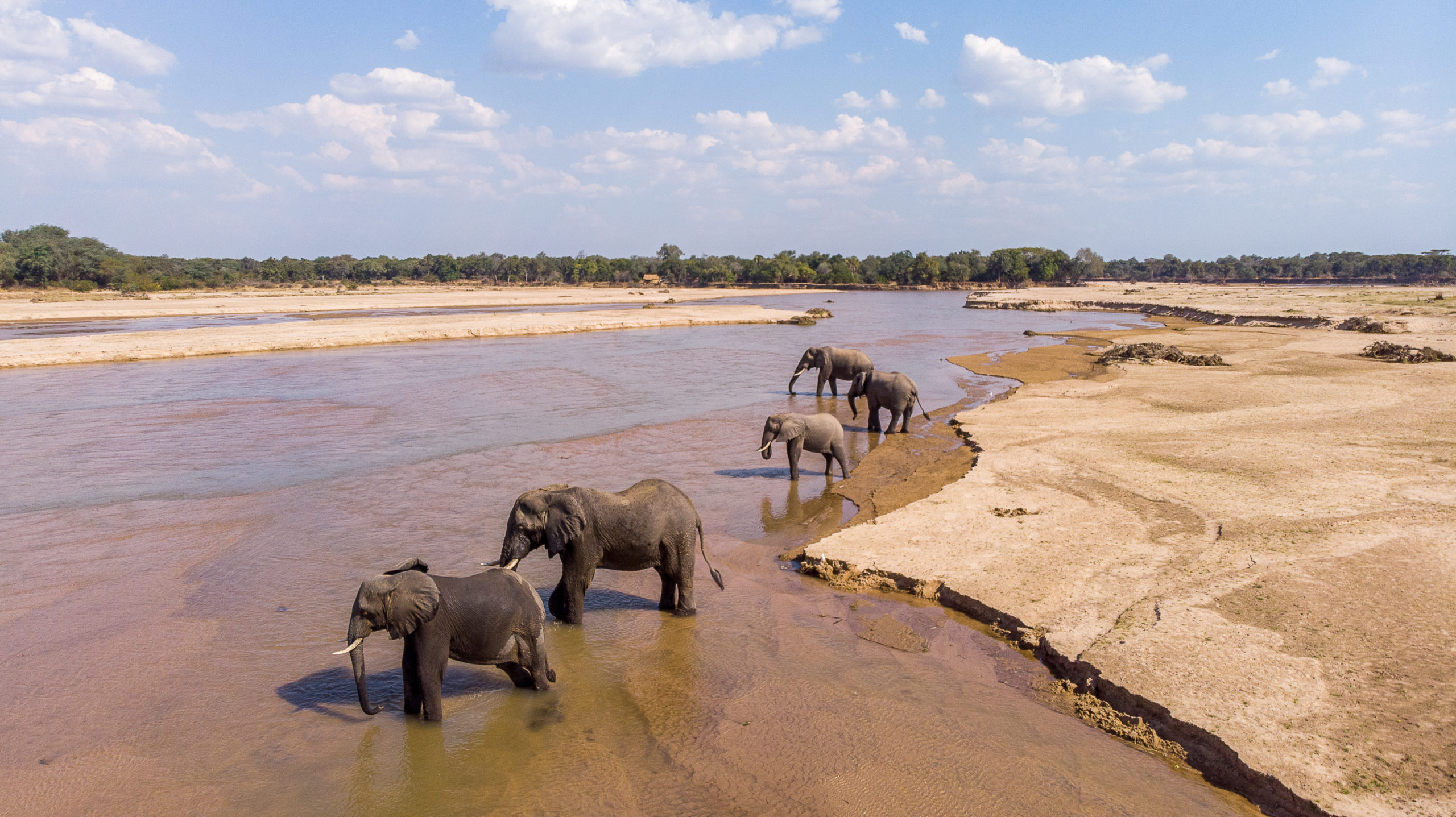 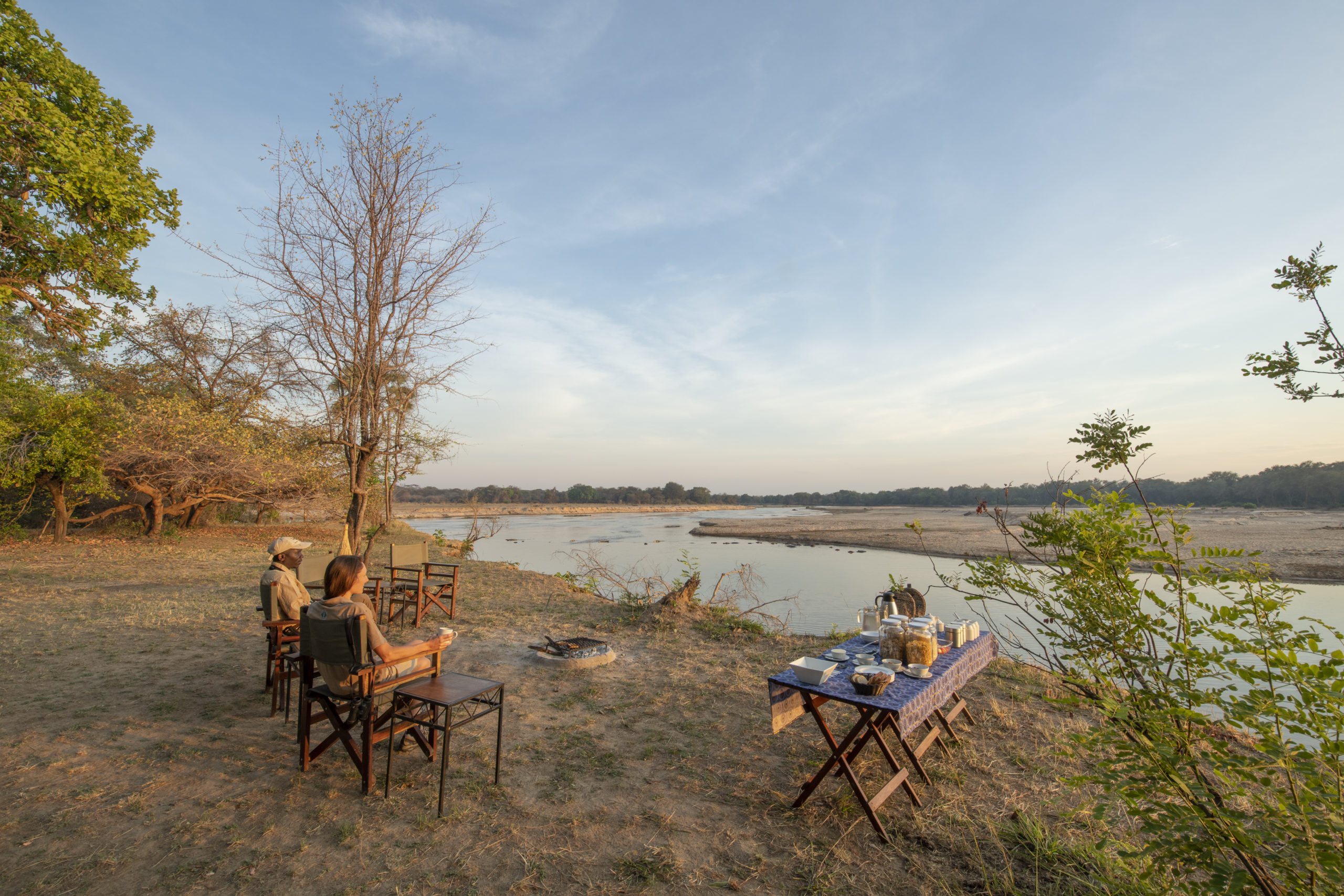 A typical day’s walking safari in North Luangwa starts at about 5 am. After coffee and breakfast around the campfire on the riverbank, we set off for what would be a five-hour walk. Taking off our shoes we crossed the shallow Mwaleshi River. We walked on through sand, over river pebbles, past woodland and grassland, watching as the world woke up around us. The occasional nocturnal creature rustled in the undergrowth on their way home, while birds and other daytime creatures started to wake up.

A couple of Cookson’s wildebeest (one of the valley’s endemic subspecies) crossed our path and then a lone bull elephant, walking along the top of the river bank. He’d found a tree laden with fruit and paused for a leisurely meal. Continuing our walk, Ilala palms marked the ancient trails taken by elephants, who had eaten the ginger chocolate tasting palm fruit and ‘deposited’ the seeds as they walked.

A three-hour walk (or one hour’s drive) downstream from Mwaleshi is Takwela, in the Game Management Area opposite the National Park, at the confluence of the Mwaleshi and Luangwa rivers.  A necklace of forty or fifty hippos stretched across the river here, resting their chins on a sandbank in the shallow water, grunting and squabbling.

Nestled among groves of African Ebony, mahogany, winter thorns and sausage trees, with the occasional Ilala Palm, the camp is perched 3m above the river, the perfect vantage point to watch Fish Eagles hunting and white-fronted and little bee-eaters who swooped out over the water.

Early morning and we crossed the river in canoes, setting off on foot into the park. Handsome kudu and waterbuck gazed passively at us. We followed the tracks of leopard, hyena, genet and aardvark. Finding ourselves with elephants on all sides we made a tactical retreat.

Final sundowners in the park were spent on the riverbank, overlooking a large congregation of hippos who rumbled and fought over territory. The following day, as we crossed the river in the vehicle to head back to civilisation we found a pair of lions resting on the cool sand in the shade of a mahogany tree. Driving out of the park, we rounded the corner and came face to face a huge herd of buffalos, numbering many hundreds, the perfect sighting to end our safari on.

It is worth noting that North Luangwa is only open in the dry season, from June to October and that the camps are rebuilt every year so as to have minimal impact on the ecosystem. Access to the park in the wet season is virtually impossible