Sarah Kingdom tells her story of an adventure in the Mukalya Private Game Reserve, located on the banks of the Zambezi just a few kilometres downstream of the Kariba Gorge and a mere two and half hour drive south of Lusaka. 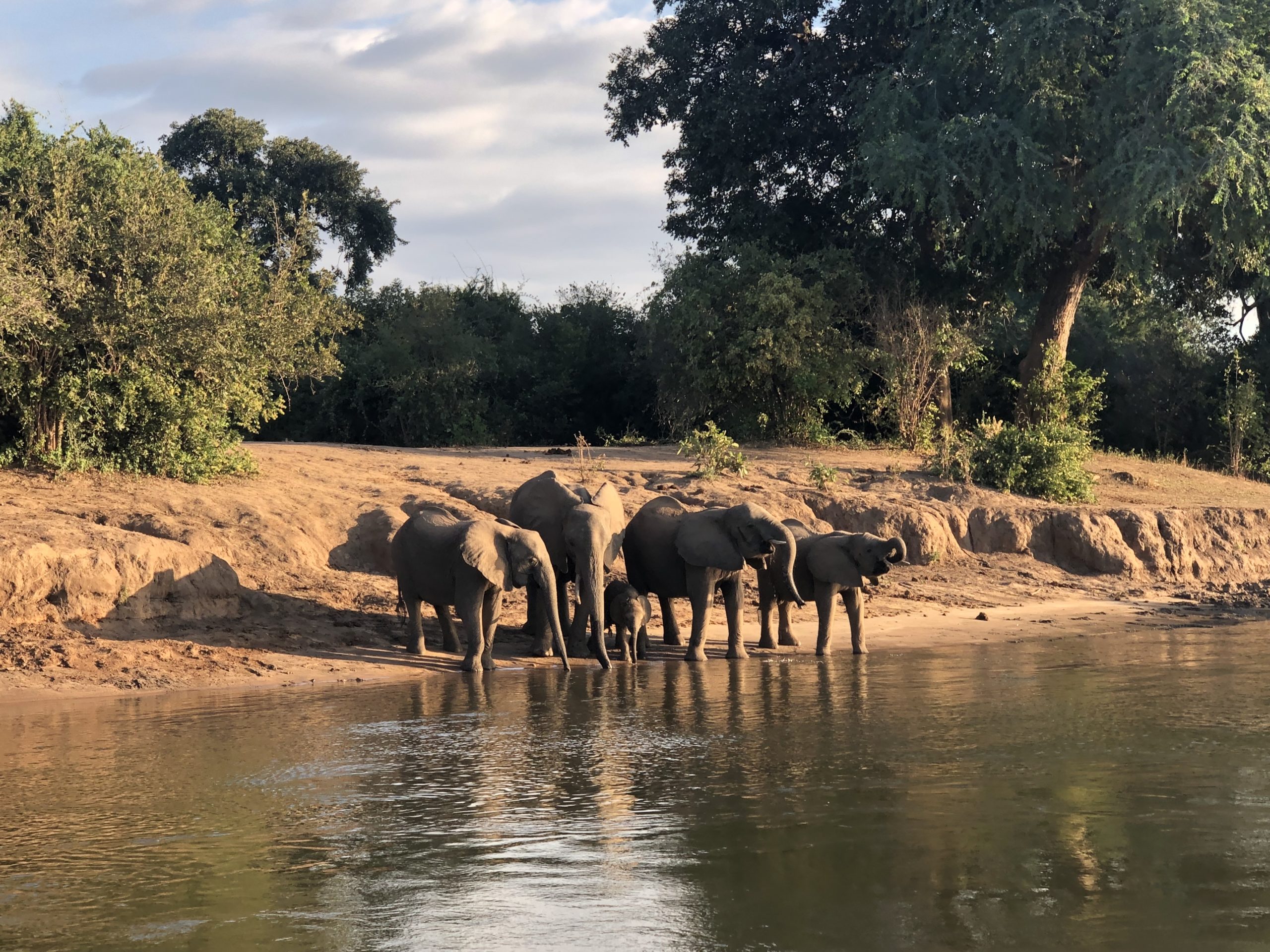 The sun sinks lower into the sky, slipping towards the horizon turning the sky from blue to shades of pale pink and orange. We have spent the afternoon fishing out on the Zambezi River, or in my case watching my husband fish! As we drift downstream we catch sight of an elephant, a lone young male, using his agile task to grasp clumps of grass and leaves to eat as he slowly ambled along the bank, almost keeping in pace with our boat. We drifted beside him for a couple of kilometres before he climbed the steep bank and disappeared from sight.

My husband continued with his fishing while I continued to watch him and the banks, where there was always something to see. Groups of women gathered to wash their family’s laundry in the river, while small children washed and played in the shallows. Men gathered to relax or chat about putting the world to rights, and of course about the merits of various fishing sites and methods.

We drift past islands, big and small, spotting an impressive male kudu with his huge corkscrew curled horns. Impalas gaze down on us from the high banks as pied kingfishers dive over and into the water. As we glide on we see something moving along the bank and go in for a closer look. It is a magnificent male leopard who seems indifferent to our presence as he saunters along the sand, stopping briefly for a drink before carrying on. We watch until he disappears from sight, and then return to fishing. My husband implores me for “just one more cast”, and then his afternoon gets even better as he suddenly hooks a tiger. After a brief tousle the fish is landed, and the grin on my husband’s face sums up both our feelings about the entire afternoon. 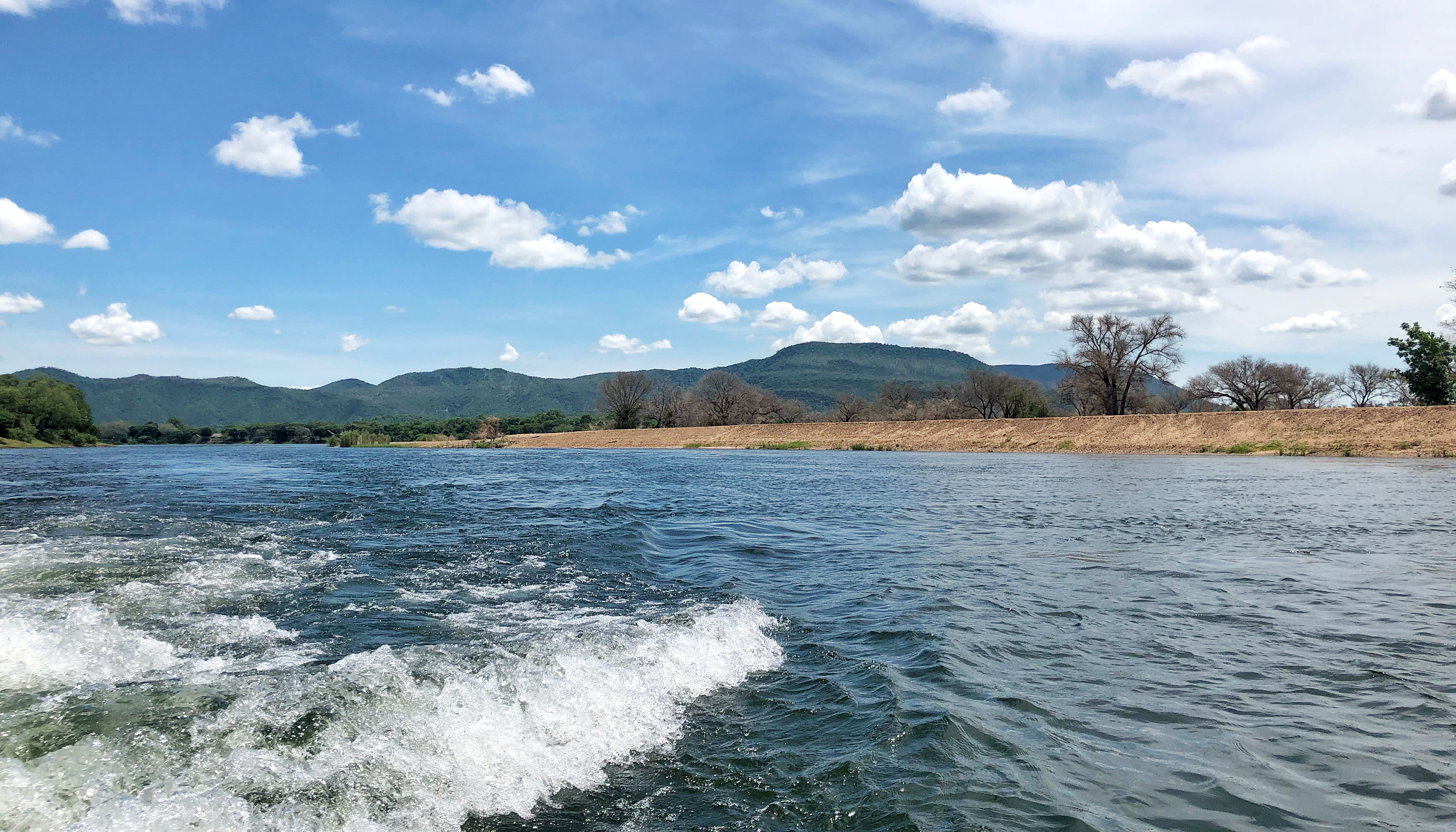 We were staying at Mukalya, a private, family-owned private game reserve on the banks of the Zambezi just a few kilometres downstream of the Kariba Gorge and a mere two and half hour drive south of Lusaka. Mukalya really is a family affair, in every sense of the word. In 2006 on a canoe trip down from the Kariba Dam wall, the family fell in love with the area and decided to purchase the property and develop it as a private weekend retreat. As they spent more and more time here, the family learnt of the area’s history, the local residents’ traditional beliefs and the once abundant wildlife. They observed that poaching and deforestation were threatening the biodiversity of the area and were inspired to do something about it. The family had a vision of reintroducing wildlife, protecting the forests and restoring the area to its former glory. Once they had securely fenced the reserve they began to reintroduce wildlife, and at the same time began re-educating the local villagers about the importance and value of wildlife and the benefits of protecting it for future generations. Their hard work paid off, and now the local community is reaping the benefits of some much-needed employment, as well as a variety of social projects including community schools, hospital and clinics.

Having invested heavily in the conservation and development of the area the family recently decided to open Mukalya Lodge to the public, which is how we now had the opportunity to come to this special place.

The previous afternoon we had also been out on the boat, this time heading upstream. 3km from the lodge we entered the Kariba Gorge. The river here had carved through the basalt rock, leaving behind dramatic cliffs and a deep gorge. As we entered the gorge the river narrowed, and the water swished and swirled, like a pot coming to the boil on the stove.  The gorge’s steep sides are covered in dense vegetation, and we pass the occasional sandy beach and a seasonal waterfall. There is an abundance of fish eagles and we can barely go 100m without spying yet another one, perched in a tree above the turbulent waters, or settled on the ground devouring a meal. In the shadows of the gorge, we see two, rufous plumaged, Pel’s fishing owls, and we are thrilled to spot these usually elusive birds. 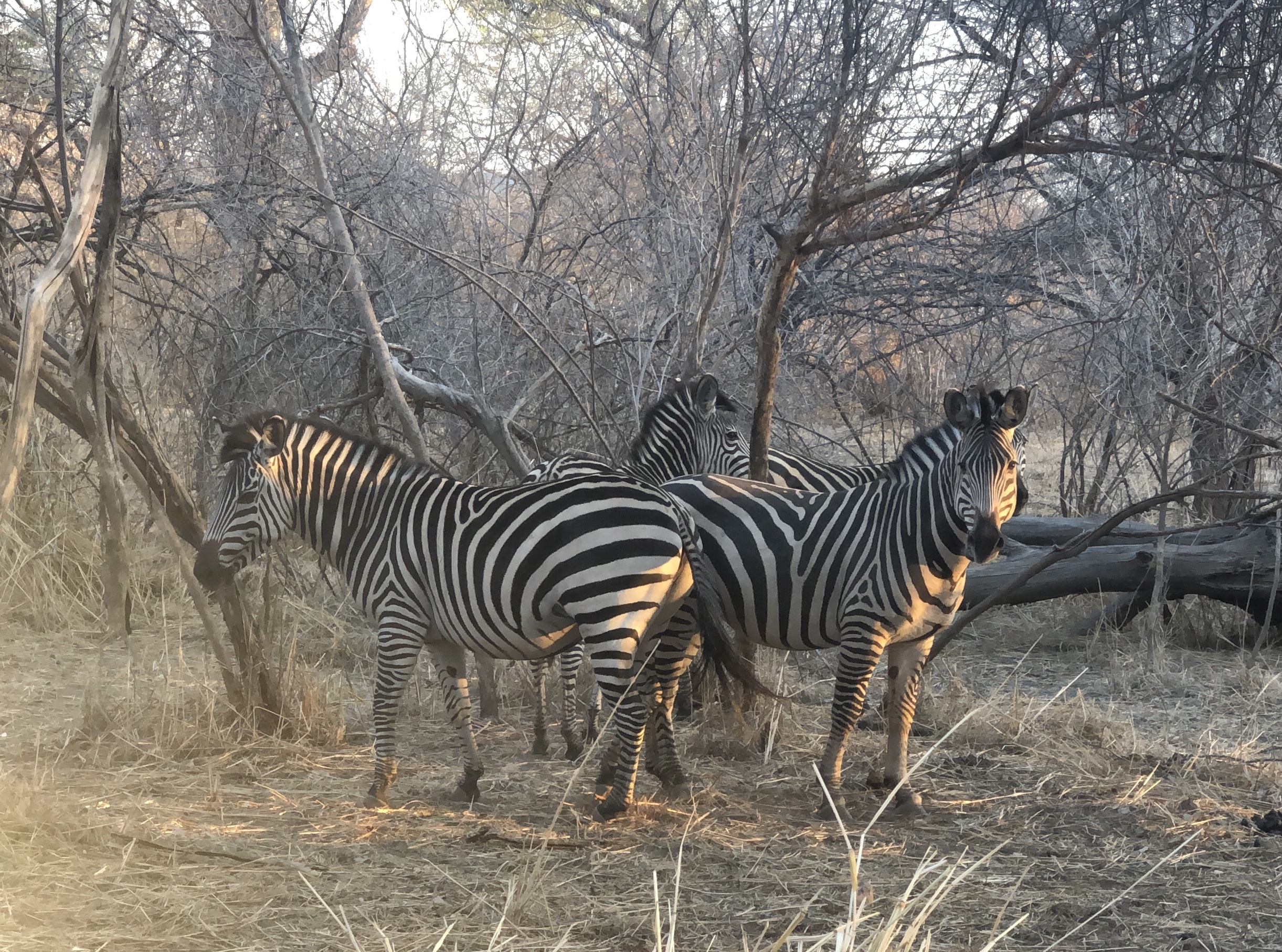 We are heading upstream to the Kariba Dam wall, but first, around the next bend, we pass the famous, or perhaps infamous, Nyami Nyami Rock, local legend has it that this island is actually the Zambezi River God, Nyami Nyami, trapped forever below the dam wall, while his wife is apparently remains trapped in the dam above; separated by the wall we are heading to see. Traditionally, superstitious fishermen wouldn’t pass the rock, and would never fish upstream of it, but time has moved on and we did in fact see a couple of dugout canoes and local fishermen, alone or in pairs, as we headed towards the dam wall. The closer we got to the wall the more the water seethed and swirled, rushing over rocks and creating hundreds of tiny whirlpools. Then, suddenly, ahead of us, rising out of the water, was the Kariba Dam, apparently the largest dam in the world for storage capacity. I had never seen it from this perspective and it loomed high above us. We sat in the boat, engine idling, and looked up at the massive wall, holding back 185 billion cubic metres of water.

Turning for ‘home’, we sped over the water, going with the current now, as the shadows in the gorge grew darker. We got back to the lodge and ended the day in a perfect way… unwinding in a glass-fronted sauna, overlooking the river and watching the water flow past as dusk darkened over the landscape. A post sauna whisky and delicious dinner rounded off the day perfectly.

The following morning we felt it was time to get our legs walking again, and so headed off, on a 12km round trip, to some local hot springs. We walked through the reserve, spotting kudu, duiker, sable and waterbuck. A golden oriole flew overhead, as we stepped over the straight, fat tracks of a python in the sand. We stopped to examine some of the smaller critters en route, including the creepy, omnivorous and sometimes cannibalistic harvester crickets, numerous spider hunting wasps and swarms of noisy burrowing wasps (who paralyse their prey, burying it live with their eggs, to provide ‘fresh’ food for when their young hatch). Leaving the reserve behind, we walked through local villages, waving at local herdsmen, greeting school children and stopping to have a chat with the friendly village headman, before reaching the hot springs. At 90°, the water was much too hot to touch as it came out of the ground. Apparently local ladies bring their pumpkins here to cook in the hot water, while they are busy farming in the fields. Further from the source, in a shaded clearing, the water was cooler and our guided informed us that bathing here, with the natural salts, sulphur and other minerals, had various and numerous health benefits. We didn’t stop to swim though. Brunch was calling, and our tummies were rumbling after our morning stroll. 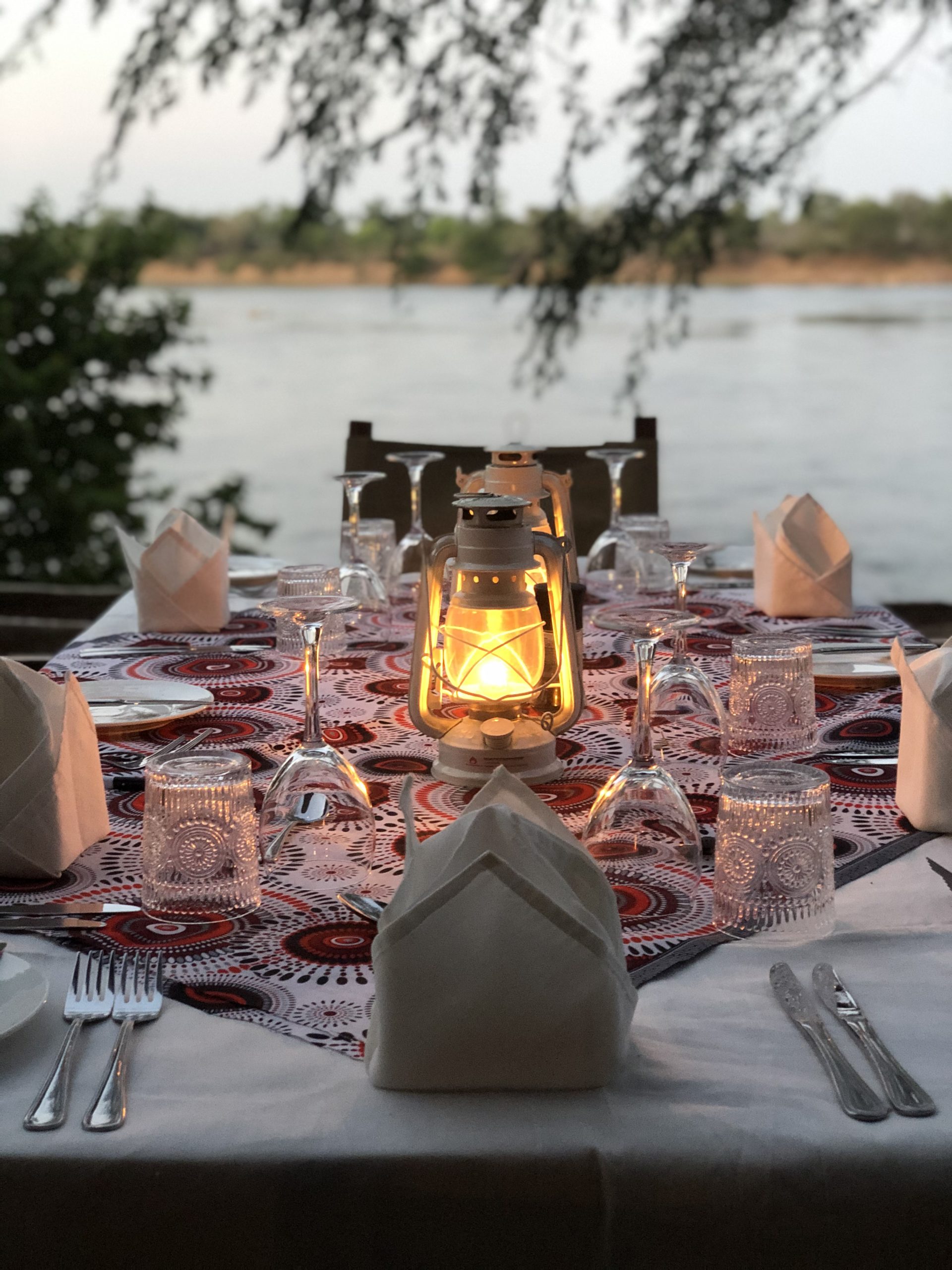 Brunch was another scrumptious affair, and after our morning exertions, we felt we had earned it! Zebra looked on, while we sat and chatted with the family and an old family friend, who’d once lived on and owned the land where the lodge now stood. Uncle Josh regaled us with tales of the past, of the huge trees that had grown here, and the wild animals that had roamed the area, before poaching and human encroachment had made a dent in the environment. On the opposite bank lay Zimbabwe’s Hurungwe Safari Area in Zimbabwe, and we heard about the pride of lions who had swum across the river, taking up temporary residence inside Mukalya’s fence, and snacking on a number of the animals, that had been reintroduced into the reserve at some considerable cost and effort! Sitting, full tummies and coffee in hand, we talked about the future plans for Mukalya; the expansion of the reserve, the reintroduction of even more animals, future community projects and more. We couldn’t help but be inspired by the passion and commitment that had gone into the development of Mukalya and could see that its future would be a bright one, and we will definitely be back to check on progress. 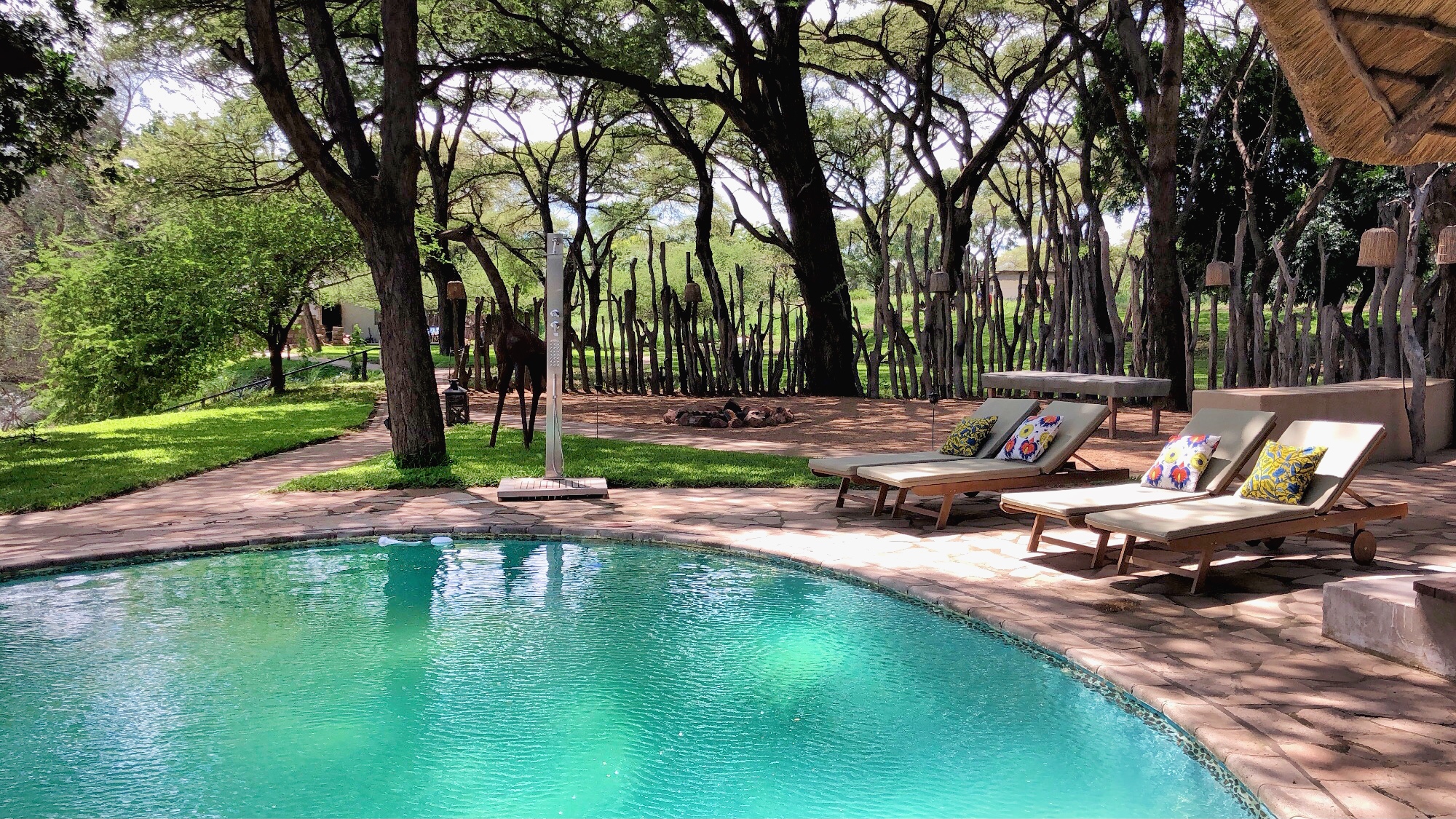 PrevPreviousRadisson Hotel Group is proud to announce its first resort and third hotel in Zambia
NextThe Kazungula Bridge Has Officially Been Opened!Next