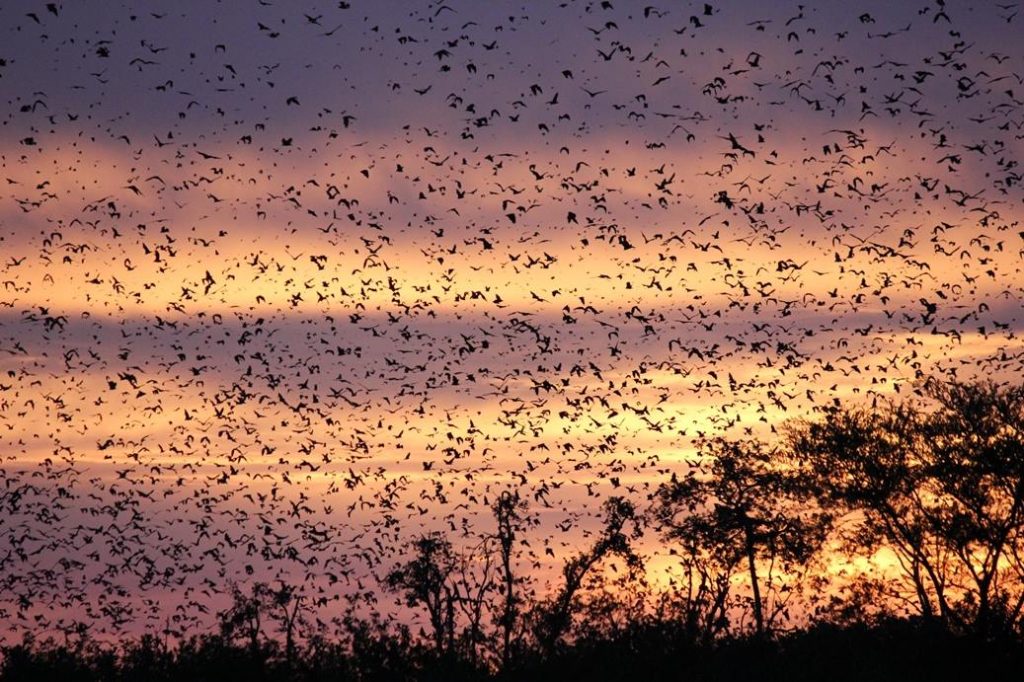 Every day up to 12 million of the winged creatures flock from all over sub-Saharan Africa to roost in Zambia. The bat migration takes place between mid-October and early December and is the largest mammal migration in the world. The straw-coloured fruit bats, which can have a wingspan of up to one metre, head to country’s protected Kasanka National Park to gorge themselves on the abuntant fruit.

The bats, weighing just 300g each, roost in such large groups that often they cause whole trees to collapse. Bat expert Dr Rachael Cooper-Bohannon, 37, said: “What makes it so unique is that they are migrating to eat. “A lot of times animals might migrate to breed, but these bats are doing it to feed, which is very rare.”

The bats eat wild fruit like musuku, mufinsa and water berries, which grow in Kasanka in abundance. The real spectacle occurs at dusk and dawn. Scout bats are sent out first, but as night begins to fall, the entire colony sets out on a search for food. Dr Cooper-Bohannon, a conservation biologist at Bats Without Borders, said: “Scout bats go and suss out the food and make sure the conditions are right before the whole flock sets out.

“Bats are very clever animals and really quite social. We can hear their clicks and squeaks, which is their chit-chat. They are also able to migrate from memory.”

For more than half an hour, the sky is filled with bats flying out in all directions. Their quest lasts all night, and they return to roost in the same mass at dawn, though stragglers will arrive for an hour after sunrise. The foraging animals can cover as much as 100km in a night in their search for tasty fruits. Straw-coloured fruit bats are the most common fruit bat species in Africa, but their numbers have declined in the last 20 years.

Dr Cooper-Bohannon said: “Bat numbers are hurt by land degradation caused by humans, and also persecution. People are scared of bats, as they are concerned that they can carry ebola. They are also eaten in central Africa, as part of the bush meat trade.”

In Kasanka, however, the bats are protected by eco-tourism, with spectators travelling from all over the world to witness the fascinating migration from special viewing platforms.